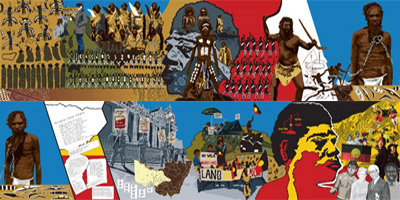 MURAL DESIGN DEVELOPMENT
The mural was developed under the auspices of the Aborigines Advancement League (AAL), with funds raised through grants secured by Megan Evans. The funding package was made of contributions from The Visual Arts Board, the Myer Foundation, The Community Arts Board and the City of Northcote. In kind support, was also provided by V-Line, K.H Industries, and the City of Northcote.

Megan Evans produced the mural design in consultation with a committee from the AAL consisting of Lin Onus, Molly Dyer, Ron Johnson, Ray Thomas and Elizabeth Hoffman. Many AAL community members also contributed information, feedback and decisions on the content of the final design during its months of development.

DATE OF PRODUCTION
The mural was completed in March 1985 with an opening ceremony the following month. As the land where the mural was installed in 1985 was later sold, the mural was dismantled and re-instated on flat land, on the grounds of the Doug Nicholls Reserve at the Aborigines Advancement League, facing St Georges Road in Thornbury, between Watts and Miller Streets in 1992.

MURAL THEME
A history of Land Rights and Victorian Aborigines with images to represent pre-colonial past, resistance to invasion, dispossession, social justice struggles, the tent embassy, a history of the Land Rights Movement and a map of Victorian tribal territories. The last three metres of the mural was designed by Gary Saunders in 2013 when the mural was dismantled and a digital image erected. It depicts the Reconciliation movement, the Bringing Them Home Report on the Stolen Generations, Pastor Sir Doug Nicholls and Lady Gladys Nicholls, Lionel Rose, and Eddie Mabo. It also shows the Fitzroy Stars Football and Netball Club whose home ground is the Sir Doug Nicholls Oval. This mural has become a significant and enduring landmark in Melbourne’s inner north.